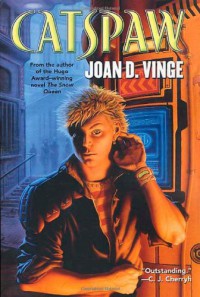 TW: Rape
Content: realistic kyriarchy, some violence, an explosion, exploitation, child neglect, sex,
Rating: 4 ½ stars
Recommendation: Fantastic cyberpunk with a smart-mouth dark hero in a sprawling universe as he copes with his own trauma among the responsible oligarchy. A must-read for science fiction readers, especially if you’re interested in rebellious survivors of oppressive social structures and highly recommended for those who like complex characters with growth amid a vividly concrete world.
Pros
Plenty of action, romance, drama, politics,
rollercoaster pacing worth another trip
Holds up today technologically and socially
Realistic/believable world building with kyriarchy
Complex characters that grow throughout the novel, Cat’s ending thoughts were particularly moving
Love the way language has evolved “N’yuk”
Rape is called rape and treated appropriately
Loved Cat, sympathetic, flawed with a stand out voice


Vinge’s Cat series is classified as young adult, which isn’t dumbed down and has mature subject content. Quickly, readers learn in Catspaw that Cat is attending first year of university, which means today it’d probably be classed as New Adult but I don’t think that’s reason to keep it from underage teenagers. I wish I had found this as a teenager because the subjects and treatment would’ve been a welcome boon.

A dear friend of mine sent me Catspaw after discussing important books from our childhood. I didn’t read Psion beforehand because of their experience and that gap didn’t hinder my enjoyment. What happened previously is explained thoroughly when it’s relevant and I didn’t feel like I was missing anything.

Rather I was intrigued by it and I’ll be reading Psion and the final book, Dreamfall. Cat is so well done: heartbreakingly sympathetic and flawed with a resounding voice that speaks to many about relevant issues. The scene where he describes his happiest moment and not knowing “how to have fun” as another character put it, hit me hard/ square in the chest/immensely/severely.

There’s also the focus on characters and sociological effects that I adore and miss in many books. As my friend said while discussing this book, such inclusion makes it feel more real. Media doesn’t hold up much when not taking such things into consideration. Flat societies that such issues just has a way of dating work that’s dwarfed by tropes.

I appreciate how Vinge illustrates the disenfranchised and how privilege blinds. Cat holds no punches for those well intentioned allies that fuck up and aren’t doing right by the oppressed. I also like how even when they get it right, he doesn’t let their biases slide and accept their bigotry against him.

Beyond the depressingly concrete kyriarchy foundation, world building rocks in many ways. I love how language has evolved in Cat’s world. The passages describing the geography made me go “This area, right?” and then Cat dropped the name N’yuk for a nice little “Ah, clever” moment. For another example, there’s how V.I.P. has become vips, which blends seamlessly with its in-universe fanciful slang like deadhead and slip.

Technology wise it has things we dreamed of and obtained like video calls on our wrists alongside faster than light travel. One thing I’m sure others in better neighborhoods will balk at but payphones do still exist. They’re quite useful and anyone with such blind privilege to shout “LOL no one uses those anymore” can fuck right off now because people do use them, just not those you’re used to considering.

Music updates as always with mind-blowing clubbing experiences described. Not to mention The Monument it opens with which makes space travel and education extremely intriguing. All in all, the Cat series has immersive and sprawling world universe building that I want to explore more.

There were some things I wish was explained more up front like the symb instrument. From the moment it was mentioned, my reaction was “Oh, tell me more!” while tapping frustrated fingers until explained further. Undoubtedly, this was intentional and its effect worked so it’s hard to gripe about it. Then, I read Joan D. Vinge’s post on Science Fiction:
"Some people are used to "understanding everything they read," unlike kids, who are used to picking up new, unfamiliar terms and concepts, and patiently waiting until they become clear, which may be why most SF readers become fans of the genre in their youth. "

That’s a difference I didn’t think of and I’m going to keep in mind as I go forward reading more SF.
For “what’s been done to death” like telepathic aliens, I think people should keep in mind when this was published: 1988. Sure, it wasn’t new then either but nowadays it’s like beating a patch of dirt out of tradition where a dead horse rotted away generations before.

I think the Hydrean’s violence “feedback loop” is fucking dumb though I can see what purpose it serves. It was easy enough to ignore since it has little effect on Catspaw’s plot or theme. Still, there are parts of the psychic abilities I found different and interesting. Also, I found it easy to follow telepathic conversations with how they were written as well.

I like how Vinge handled Humans versus Hydreans and human…”progress”. A common theme but done well. After all it’s not that tropes themselves make a work bad but how you use them and she uses them masterfully. It’s no wonder to me Vinge’s popularity and success.

About the Author
Goodreads doesn’t do her justice. Many props for such fine writing and for being groundbreaking:
"In the first several years of her career Vinge earned the reputation of being one of the few women authors of "hard" science fiction, and she was a frequent contributor to Analog, which was certainly the publication most devoted to that style. Yet at the same time her stories have long been noted for their strong character development as well as their willingness to tackle such "soft" science issues as social structures and gender roles -- not surprising given her anthropological background"

And wiki that speaks of her triumphing over medical adversaries to return to writing.