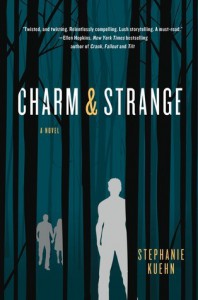 TW: Abuse, Suicide. It's not graphically detailed. It's wrapped in mystery the whole way through as Win/Drew tries to cope and live. As a survivor, that reveal wasn't completely surprising. I was worried about it for last half of the book at least as a possibility. But what happened with his family did surprise me.

This was quite the psychological thriller. It's not what you'd expect from the genre. From any of its genres. It's not for everyone, but I loved it. It's fascinating and fucked up. I couldn't put it down.

It's creepy, dark, and twisted. It's told in two narratives: past and present, antimatter and matter. The tension inside Win/Drew is incredible. He's an unreliable narrator...or is he? And which version of himself? What is going on in his family? What happened to them? Why is he like this? Is there an actual paranormal twist coming or not?

As much as he tries to push people away, to degrade, he's a sympathetic character. Even before the big reveals. His a passive experience, waiting for something to happen. His mistakes are in a pattern and when the pieces all fall together, it's heartbreaking and understandable.

The ending is sad, hopeful, and real. You do not slap a band-aid on this kind of thing. A relationship doesn't “fix” you. It's a long, hard fucking process. It's depressing? OF FUCKING COURSE IT IS! When reading the blurb and starting it, I can't imagine thinking it'd be a happy tale. It's honest from the get-go, even shrouded in mystery. It's Andrew's truth as he knows it the whole way through