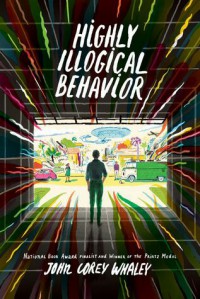 I was lucky enough to win Highly Illogical Behavior in a prize stack of ARCs from YAWednesdays. When #ARCAugust rolled around and I still hadn't read it, I was resolved to do nothing but read my stack with this at the top. Then #ReadThemAllThon popped up and of course, I added it to the list as an extra bonus.

Right now, I'm just mad I didn't read it sooner and sad that I don't have a similar read to dive into right this second.

It is obvious Solomon was going to find out about Lisa’s plan but I couldn’t stop reading. Everything was delightful. The plot might be mostly formulaic but the characters and how the tropes were flipped more than makes up for it.

I loved how the kind of but not really love trio turned out. It’s so refreshing! It deals with public perception, gender norms, and jealousy brilliantly. It’s not preachy or the point, it just is—gloriously.

I especially adore how it’s not a quick fix for Solomon. Before reading I was a bit worried it’d be another romance to the rescue but NOPE! His progress is authentic, in the baby steps sometimes going backwards way.

Support systems are important but you can have a great foundation and still struggle. The kids came in and made it better, but didn’t *poof* solve it. Therapy is great, there seriously needs to be more positive portrayals of it, but I don’t begrudge Solomon’s choice. I remember loathing it as a kid forced to go. (Now I’m kicking myself.)

Solomon is such a doll. I just wanted to come kick it with him, geek out, and play wingman. His panic attacks were hard to read because, as someone with an anxiety disorder, it’s perfectly portrayed. And the guilt over it being irrational when you have such a good life comparatively like Solomon’s…I relate so hard even though my life’s been much rockier. Those thoughts are just always there.

Lisa is complex, smart, and driven. She’s oblivious and stubborn when it comes to other people. She has the book smarts and the right manner when Solomon has an attack but she doesn’t get it. She does also come with gender norms, especially about Clark. However, through it all she’s likeable. I just wanted her to clue in. Her growth at the end is amazing. I love her essay but it doesn’t read like something would actually submit. Though I suppose that’s the point… Bonus: She doesn’t become a “slut” or swear off men because of her mother. No slut-shaming, yay!

Clark is an adorably nice guy. He is clueless like Lisa but more empathetic from the beginning. I like how he’s so secure in his manhood, and how he handled the romance threads between them all. Plus, it doesn’t bother trying to give a reason on why he doesn’t want to have sex. He doesn’t need one and his decision needs to be respected. Sexism hurts men too and I love this inclusion. He’s dreamy and understanding and how he makes it up to Solomon *dreamy sigh*

Solomon’s Parents: Parenting goals right here. At first, it’s a bit “Why aren’t you doing more?” but the reality of the situation crushes any doubts. It’s positive but not fake and perfectly perfect. I just want to hug them and come over for dinner.

Its great people have Spock to connect to, but it makes me sad how long it’s been and how that character is the one pop culture icon that’s relatable. Will the next generation finally have someone different? What happens if his Star Trek is too far gone for teens or they don’t like Sci-fi? (Is there someone else and I missed it? Please enlighten me!)

If you want a cute and funny and light and dramatic and realistic and diverse read (any or all of the above), you should seriously read Highly Illogical Behavior. I’m so happy to have read this. It’s such a relief to read something as great as this and NOT have to sigh or accept or rant about problematic aspects.