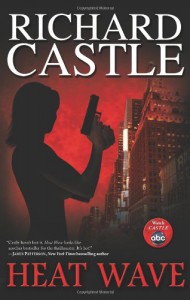 For those that don't know, Castle is a fantastic police procedural on TV with protagonists Kate Beckett and Richard Castle. Kate is the tough woman who's been personally touched by a murderer and rocking it in a man's world. Richard Castle is the funny, geeky successful crime novelist that has poker games with the real big boys of his genre, including cameo appearances.

Starting out they've got the will they, won't they attraction down like Molder and Scully. (No lie, my first time typing that I used fan-contractions “Sculder” and “Moldey” XD) Of course, now Castle is in its 8th season and it's obvious how these two turn out. But believe me, the ride getting there was so enjoyable. Their OTP status is cemented.

Richard Castle tags along with Kate Beckett for inspiration for his next novel series. And what do you know, his protagonist is based off of her! During the show, his novels are mentioned throughout and it's a lot of fun. Someone had the brilliant idea of writing and publishing those novels as if Richard Castle is real.

This is great for the shows fans like me. Brilliant, really. Makes me want to kiss whoever thought of it. But what about everyone else?

The Good
Spark between Nikki and Jamie
High thrill ride case, kept guessing though if you tired, you might be able to get it first

This alternative universe Castle has plenty to offer those fans who'll enjoy the nods and pieces falling in place from the show. However, this version is more HBO than ABC with a different tone and couple balance. For those just looking for a solid police procedural, it'll work but it's no James Patterson. (Heh, Castle would pitch a fit over that!)

The Couple: Nikki and Jamie


Even though they're just starting it's clearly favoring Nikki in all things and even after a month of tagging along, Jamie isn't as useful as Castle. It's funny how Castle slams the hypothetical and case solutions while Jamie's strength seems to be the interviews.  Though that makes sense for a prize winning journalist but it, along with the loss of Castle's theatrical, fantastic fictional insights, leads to the couple imbalance and darker tone.

Again, being a huge fan,  I can't help but smile because it makes sense. Castle's ego and pomp is dwarfed by his love and admiration for Kate, which makes him see and write her as Nikki who could do it all on the cases by herself and doesn't need him. Except as a romance partner, even if he's got a couple of good interview questions up his sleeve.

They've still got that spark,  but without the build up, the history, the time, and dedication their OTP status is up in the air. Aided by the fact we now know the premise of the next book, whose blurb reveals they have broken up. :(

Well now, it's to see how get they get back together and stay that way.


There's wonderful bits and pieces I never thought of before, like how and why Kate (Nikki) walk up to the crime scene. Then there's things that felt off till I thought about it, like Nikki hating "fru-fru" coffees yet drinking them. But a later revelation regarding hyper vigilance and indulgences made it click.

Jamie is just...Jamie. He's got some wise-cracking antics but he's not on Castle's level. There's several things missing from the novel to allow him to be as outrageous and helpful as Castle and the tone is far darker anyways. He's subdued and has different strengths. He's not bad, but after years of loving Castle, he's a pale comparison. Coming with fresh eyes, I'm sure what you'll see but it won't be tainted like my view.

“Roach”: Ocha and Raly are still the bromance to beat but their characterization so far doesn't stem beyond that. What I know about them from TV helps, but if you're reading as a stand alone, they're task monkeys with little else. In the show, they are close to each other and Kate and Castle. Here, their feelings toward Nikki are more subdued and they don't enjoy, encourage nor invite Jamie in thought it's still early in on Jamie's tag along state.

Dr. Lauren Perry fairs a bit better than Roach, being Nikki's gal pal and getting some one on one time with our lead detective. I will admit, much feels missing but there's no way to cram 8 seasons of character progression and feeling in a debut novel. This is a drawback being a fan, I need to learn to chill but it is against our nature.

A stand-in for Alex, Castle's Daughter, is sorely missed. Not only was she a great character, she helped balance her father's fun and carefree ways. And seeing Castle being a good dad is so important to his character. Jamie Rook doesn't and can't measure up to Castle. Though I understand why she's missing from our ensemble, doesn't mean I have to like it.

For being a solid, short (seriously surprised with its 196 pages when I picked it up), quick thrill ride case. Not the full fun of Castle but not a dark suspense-thriller. It has everything needed to blossom into it's own flushed out fictional world given time and it's enjoyable as a fan nonetheless.

If you're a fan, I say pick it up now. There's plenty to gleam from it and it's an alternative universe Castle. Beware, your fandom feelings though, the balance and tone are definitely shifted to be darker.

For those who haven't seen Castle (WTF are you waiting for?!? lol!), it's a standard police procedural full of suspects, twisting clues, and thrill ride threats. It's not as flushed out as a stand alone work, so some characters are rather 2-D for the moment. But the elements are there and I've got hope for the next book, Naked Heat, building up to come into its own.