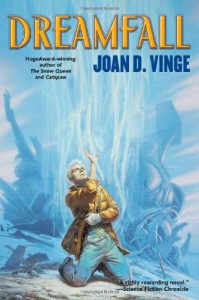 Recommendation: If you insist on completing the trilogy. Otherwise, Catspaw (#2) is the must-read while Psion (#1) is solid.

Rating: 2-2 ½ stars I read it, enjoyed parts of it but it has problematic tropes and nonsensical premises I can’t accept with a unsatisfying ending.

Pros
Get up close and personal with Hydreans…

Cons
...Who are a classic example of Magical Native Americans, with Noble tokens
Insta-love
Sucktastic ending


It’s basically Psion redux with insta-love only it’s open ending isn’t the beginning of a trilogy, it’s the dissatisfying result of one. It’s not all bad but I love Cat, he’s what I read for, found pleasure in when others didn’t. His ending SUCKS. It pisses me off. Sure, I can imagine how things will go after the last sentence but I don’t want headcannon, I want closure.

Maybe it’s more fitting with the theme and it take another book to make it right but still. Vinge made me care, connect with him and I’m left to drift among the stars asking questions without answers…Okay, so it definitely fits with the tone and message of the Cat books but that doesn’t change my discontentment.

I’ll gladly take and read more of Cat’s life and to leave it hanging so precariously is disappointing.
Before Hydreans were described vaguely with little information on daily life and culture but in Dreamfall we get up close and personal, which initially convinced me to read it. However, it’s obvious they’re Magical Noble Native Americans, which is hardly acceptable. Toss in how people keep bringing up how their civilization was declining when Humans popped up and how their welfare is tied to the land and it becomes enraging.

Reading this made me realize what felt off about Psion’s villain. For someone proclaimed as so radical and dangerous, he hadn’t actually planned on harming anyone. He was just willing to fight back, cut off their valuable supply. Yet the good guys are being used and trying to convince humans that they’re valuable tools. Why is it always “Be a monster or be a useful tool”? The fight for the rights of people to be recognized is still being fought on the terms of the oppressors, which is something I’m not down with.

Not only that but the big drama of the book is this conflict between two sisters: one a radical terrorist willing to harm and the other subjugating herself to prove how harmless and useful Hydrean’s powers could be to their oppressors. In Psion there was much the same but instead both men on each side of Cat were irritating fucks who learned their lesson. Instead, the same dichotomy shows up wearing my patience and one woman is clearly the favored option. Cat praises her and is punished for how he bucks the status quo.

The feedback loop thing still gets me though. Before it had little enough impact in Catspaw to overlook while in Psion I took Cat’s damage as PTSD to rationalize it. However, in Dreamfall there’s a deadly altercation between a Human and a Hydrean.

It means you can’t defend yourself, which I have a huge problem with. It’s talked about how it evolved that way to help them manage and control their powers, but that sounds stupid unless the Hydraens themselves made it so because evolution isn’t guided or linear, you adapt to the environment and that feedback loop seems like the quick way to an evolutionary dead end. And the scene where “everyone’s fears about Hydraens and Humans fight were realized” is stupid because they wound up dead, like everyone knew they would. Where’s the threat to Humans, exactly? Even if there were a Hydra for every Human (there’s not), they’d all be dead. They’d have to outnumber them vastly to be able and willing to sacrifice one person for every human and survive to tell the tell. Sounds like “Yellow Peril” and its ilk bullshit.